Do you want an exhillerting fight? Pursue a school of jack! The crevalle jack (Caranx hippos) is in the same family as pompanos, jack mackerels, runners, and scads. Jacks are commonly known as jack crevalle or the common jack, but can also be identified as black-tailed trevally and black or yellow cavalli.  Jacks can be found inshore, nearshore, and in open water. They can range from 3lbs to over 20lbs. In Southwest Florida jacks are very prevalent inshore year round, but can be found offshore as well, from March to September.  These fish can tolerate a wide range of salinities which is why they are commonly found in the canals and rivers that feed our local waters. Typically, a school of jack crevalle will corner a school of baitfish at the surface and feed.  This feeding can create a ton of surface commotion that can be seen at great distances and help to put you on the school. This makes for a quick hookup if you can get a bait or lure into the school as they are feeding. They will eat almost anything cast into the mix.

Jacks can be caught on most tackles but usually they like something fast moving. 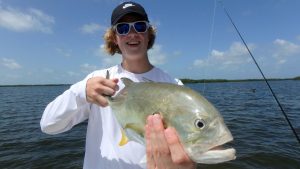 If you are using live bait make sure it is an active, lively bait.   Anglers often catch them while targeting other species as they will roam the same areas as other inshore predatory fish.  Once hooked the battle can be spectacular…our largest to date was about 20lbs and is pictured above. That fight lasted about 25 minutes and I’m not sure who was more tired the fish or the angler.

What kind of Rig:

We often catch jacks while fishing for redfish and snook, so we find the average inshore rod and reel will usually do the trick, unless you are on the big ones, but that goes with all fish.  I recommend a seven foot, medium heavy rod in the 10-20lb range, and a 3000-4000 class reel. If you are on the big ones, step up your set up as needed. We use the Diawa BG reels on our charters and find them to be a happy medium between reliability and affordability.

When using live bait we find that pilchards, threadfin herring, finger mullet, and shrimp make great choices. Always make sure your live bait are active and lively. Artificial lures need to be worked with some speed in order to trigger a strike.   Some of my favorite artificial lures are the  Zara super spook jr and Z-man Paddlers.

Where to find them:

Jacks are often found in deep water next to structure.  This could be a deep canal with dock pilings or just a deep hole on a grass flat.  We often have our best luck fishing a channel mouth that connects two larger bodies of water.  These create natural funnels that bring bait and predators together. Often I will spot a school from my tower while moving from spot to spot and jump on them quickly to get a few casts in before they disappear.

By most standards their table fare is poor.  The meat is dark and has a strong taste. Most people choose to catch and release.  Some people however really like them. If you decide to keep one, make sure to completely remove the blood line.